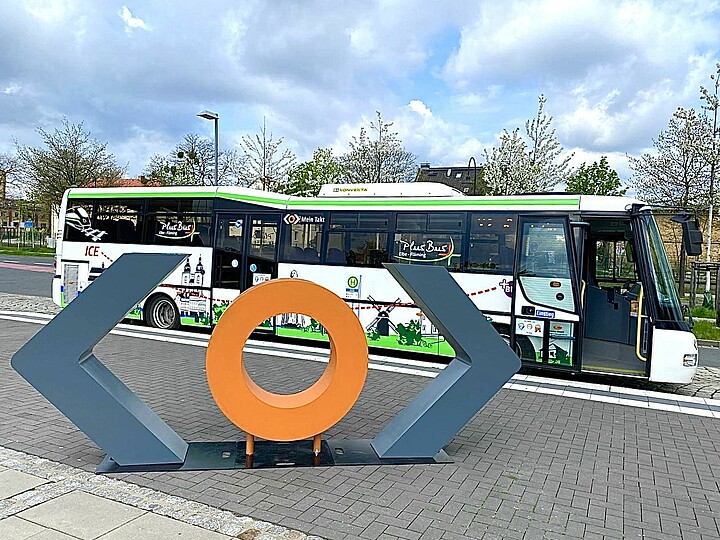 Large train station for the opening of the new Elbe-Fläming Plusbus line. Saxony-Anhalt's Prime Minister Reiner Haseloff and the Transport Ministers of the states of Saxony-Anhalt and Brandenburg, Thomas Webel and Guido Beermann, started a new cross-border bus service today. As of now, the Elbe-Fläming bus will be the first cross-border plus bus route to connect both federal states. It is the 32nd plus bus in Brandenburg and the 30th state line in Saxony-Anhalt.

Line X2 now connects Lutherstadt Wittenberg in Saxony-Anhalt with Bad Belzig in Brandenburg every hour on weekdays and every two hours on weekends. According to the proven Plusbus concept, there is a direct connection to the S-Bahn to Leipzig and the ICE in Lutherstadt Wittenberg. The bus connection between Brandenburg and Saxony-Anhalt will thus be significantly improved and, thanks to regular connections on weekdays and at the weekend, an attractive public transport offer.

„The state of Saxony-Anhalt welcomes the new bus route X2 between Lutherstadt Wittenberg and Bad Belzig. The attractive offer creates transport connections across state borders to Brandenburg. We support the test operation of the line with state funds.“

„The new X2 bus line expands the state rail and bus network in Saxony-Anhalt and also operates under the“ Mein Takt ”quality seal. We are happy about the local initiative from Bad Belzig and Lutherstadt Wittenberg to test a new connection here. We wish the project every success and, above all, numerous satisfied passengers.“

„With the new bus line, the transport offer between Fläming and Lutherstadt Wittenberg will be considerably improved. This is how the Fläming can be easily discovered from Wittenberg. Lutherstadt, with its leisure and work opportunities, can also be reached quickly and comfortably for the residents of the localities along the new line. There are new and attractive connections for commuters, those looking for relaxation, schoolchildren and trainees. I am pleased that we have succeeded in implementing this environmentally friendly transport offer across national borders. I hope that the X2 line will be used actively by the citizens.“

„The newly introduced Elbe-Fläming plus bus line is another piece of the puzzle for us to be able to offer the population in our often rural service areas attractive public transport options as an alternative to individual transport. The idea, born three years ago by the municipal company Regiobus Potsdam Mittelmark and the private family company Vetter Verkehrsbetriebe, has now been implemented with the support of NASA and the VBB transport association. In order to create a close-knit and demand-based line network, it can be useful and expedient, as in this case, to run line routes across federal state borders. The direct connection to the ICE train station in Lutherstadt Wittenberg is just as attractive for citizens of Brandenburg as it is for the population in the Wittenberg district. The offer is even more attractive due to its hourly service and the modern equipment of the vehicles.“

Guido Beermann, Minister for Infrastructure and Regional Planning of the State of Brandenburg:

„With the Plusbus X2, we have already created the second cross-border line in Brandenburg. The many commuters and tourism benefit from this, with the X2 in particular in the southern district of Potsdam-Mittelmark via a more direct ICE connection in Lutherstadt Wittenberg to the south and south-west. In this way, we are contributing to the region's economic success, increasing the attractiveness of climate-friendly public transport and taking another important step on the way to the mobility transition.“

„With the X2, the Plusbus Elbe-Fläming, from Bad Belzig to Wittenberg, and with quality! Every hour, with a direct connection to the rail, even on weekends. The Plusbus is and remains a promise of quality! I congratulate Regiobus Potsdam Mittelmark, NASA and Vetter Verkehrsbetriebe, who are launching the second cross-border plus bus line under the quality umbrella brand. A groundbreaking example for achieving the urgently needed traffic turnaround. The X2 is now the 32nd plus bus in the VBB-Land. Here it was shown in an impressive manner how a good concept can also be successfully implemented across national borders through excellent cooperation and support. Our experience shows: With higher quality in bus transport, you can also gain more passengers.“

„We as a district have been preoccupied with the idea of a public transport connection to the ICE in Wittenberg for a good two years. With the connection to the Wittenberg train station and the use of the ICE, we are creating a very attractive connection to the south of Germany without having to go to Berlin beforehand. The idea of introducing a new plus bus line from Bad Belzig to Wittenberg was therefore included in the local transport plan of the Potsdam-Mittelmark district in 2020. The special thing about the line is the cross-state connection of the networks and the recognition of the BahnCard 100. We are pleased about the cooperation with the state of Saxony-Anhalt and the district of Wittenberg and hope that many commuters and holidaymakers use this line actively and that we can therefore use it Can contribute to the promotion of local public transport.“

„With the Plusbus X2, we have now launched the 10th Plusbus route in the Potsdam-Mittelmark district. I am delighted that the neighboring Vetter Verkehrsbetriebe has met with such open ears with our idea. This also proves that such a cooperation is not only possible across district and state borders, but also for a large private, self-financed transport company such as the Vetter Group and the municipal public-service Regiobus Potsdam Mittelmark. It is very important to me to express special thanks to all those involved in the preparation, especially our planners.“

Since September 2018, the state of Brandenburg has supported every plus bus kilometer in addition to the basic funding with 0.40 euros. The state government will thus provide more than three million euros for bus transport in rural areas for the 2020 accounting year.

In Saxony-Anhalt, most of the Plusbus routes are integrated into the regional rail-bus network “Mein Takt” and are also significantly subsidized by the state.

Passengers can recognize the “plus” in the offer from the logo

In the region, the Plusbus can be recognized by the vehicle and the stops by the product symbol: a purple circle with the words “Bus” and a large plus sign. With the common plus bus symbol, passengers from other regions should also find their way around the transport system more easily.

Information and timetables for the Plusbus Elbe-Fläming can be found at the stops, in the brochures and at www.vbb.de/PlusBus - information on the regional rail-bus network in Saxony-Anhalt at​​​​​​​ www.mein-takt.de/busfahrplan .