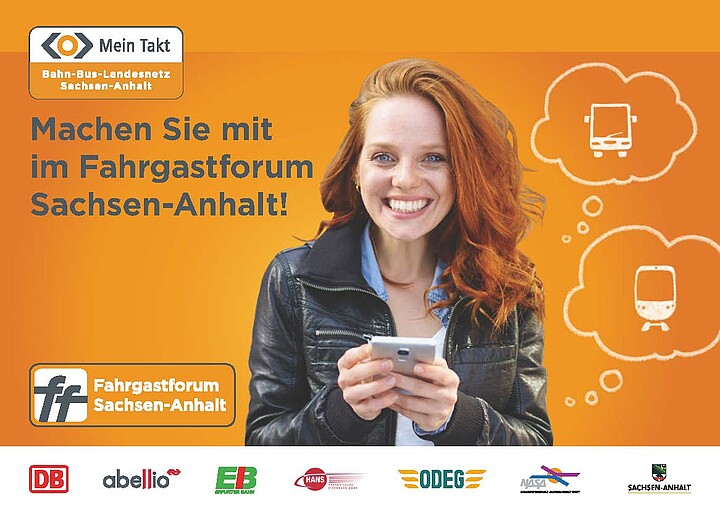 What are the concerns of passengers in Saxony-Anhalt, how satisfied are they with the local transport service and what improvements could be made? In the past, these kinds of questions have been - and are still - discussed primarily within a select circle during passenger round table sessions. The Nahverkehrsservicegesellschaft des Landes Sachsen-Anhalt (NASA) is now heading in a new direction and has established the passenger forum web portal specifically for this purpose. "We are the first in Germany to enter this new territory", explains NASA CEO, Peter Panitz. "There are a few concepts here and there, and some initial experiences with such platforms. But in this case, it's the first time it has been implemented in a consistent and long-term manner. We're intrigued to see how the concept will be received. It's not going to be a 'complaints corner', but rather a platform for exchanging ideas. We want to enter into a dialogue with interested passengers."

Several times a year for a period of approximately two weeks, current regional transport issues will be opened for discussion on the Saxony-Anhalt passenger forum. Passengers will have the opportunity to express their opinions, wishes and suggestions, as well as to discuss with other users and to submit suggested topics themselves. All regional rail companies in Saxony-Anhalt are involved. The project shall initially run for three years and then be extended if it has been well received. The traditional channels for complaints and suggestions for improvement from travellers shall remain available alongside the forum.

On 28th January, the passenger forum will begin its first campaign, focussing on the purchase of tickets. For two weeks, discussions will revolve around sales outlets served by staff, video travel centres, e-ticketing and mobile phone tickets, as well as ticket machines at the station. "There have been many changes to sales channels over the last few years and we're interested to hear the wishes and suggestions of travellers regarding future developments in this area", explains Panitz.

The passenger forum can be accessed at www.mein-takt.de/fahrgastforum